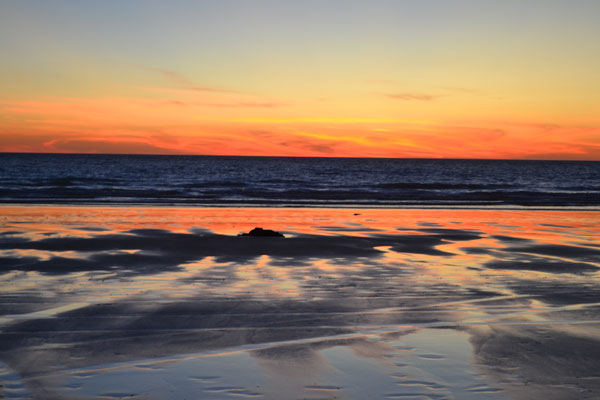 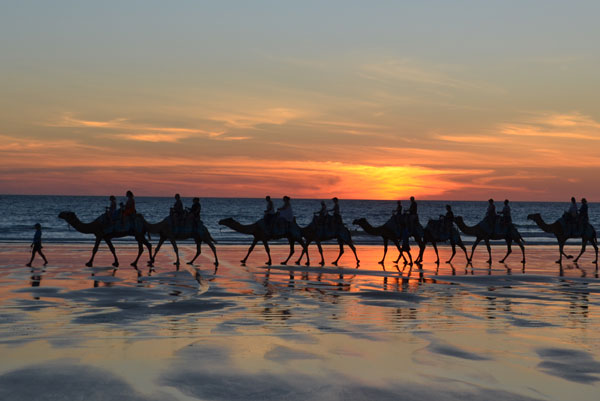 I was once accused of using someone else’s image in a piece of work. It was the image above that I took while on holiday in Broome. The accusation was an easy mistake to make. Why? Because the image of camels at sunset on Cable Beach has been taken over and over – camels in silhouette, stunning sky and sea behind. It’s like a story that is told over and over. Camera angle may be different but it’s essentially the same old tired image. Do an image search and thousands of the same thing will pop up. So what to do when you’re at a popular location? How to present or use the imagery in a way that breathes a new story into the place?

My approach was to start with this image. Firstly you will note it’s sans camels. What that then highlights is the patterns and colours playing out on the sand. The fading sunlight also got me thinking about life, in all its rich colours which also eventually fade away. Life is temporal.

I then decided to place it within a circular shape as a reference to the Pearl industry of the area but also a biblical verse about a “pearl of great treasure”. The verse raised questions about what is important about life – of interest to both secular and religious people. Thus the final work became 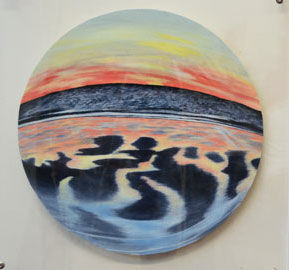 The story behind the piece…

The time in life is late. The sun is setting. There is still light in the sky however, still time to ponder…

What really matters in your life? What are you earning all that money for?

This piece and its companion, Twilight, was generated from two sources. One being listening to Marjorie Jackson-Nelson saying she would give up everything – Olympic medals, material wealth – just to have her husband back. The other from the Gospel of Matthew in the Bible –

“..the kingdom of heaven is like unto a merchant man, seeking goodly pearls:
Who, when he had found one pearl of great price, went and sold all he had and bought it.”
(Matt 13:45-46 KJV)

Which brings us back to…

So when faced with a location that has had the same story told numerous times, look for the different perspective. What other story can you tell?

Inspiration is everywhere. Some days it's hard to see. Other…

The period of Lent is the 40 days before Easter…

"I'm not creative" the person says as they look at…